Amy Gabb is our local fighting superstar! At 23 years of age she is a recently qualified ECE teacher, a solo mother, a part time worker, and a committed sports woman. Amykeeps herself busy with Kyokushin Karate, Muay Thai Boxing and Kickboxing!

Amy became involved in Martial Arts as her dad has opened and ran many clubs throughout Tauranga, Auckland, and Northland. At the age of 14 she trained in Kyokushin Karate and Kiaido Ryu Martial Arts for 4 years where she competed as a colt. At age 18 Amy made the move to Tauranga to get her teaching degree and at 19 became a mum to daughter Nyah. Amy knew that she had a fighter within her and wanted to find somewhere to; train, get fit, lose the baby weight, meet new people.  In 2012 she had her first Muay Thai novice fight as well as her first Women’s fight in Kyokushin.   She has been training and fighting ever since. 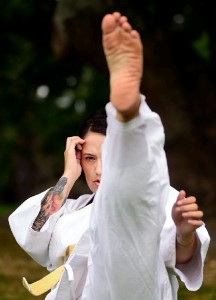 In 2014 Amy won both the New Zealand and Australian Kyokushin Full Contact Karate Heavy Weight Elite Women’s title. With having held the New Zealand title for 2013/ 2014, Amy was selected to compete in the 2015 Kyokushin Mixed Open World Team Cup Tournament held in Sao Paulo, Brazil, July the 4th and 5th.  Over there Amy won her fight against a South American fighter which is an amazing achievement.

Amy is currently in preparation for the World Tournament which is held in Japan in November.  She is training 6 days a week including some sessions at SPEE over at The Mount.  As you can imagine, Amy battles with a number of injuries due to the nature of her sport.  Injuries we have treated include finger sprains, rib dysfunctions, back pain, neck pain, haematomas, overactive neck muscles and tight hamstrings and calf muscles.

Amy is an inspirational woman who is self-motivated, driven and organised.  Back In Action is proud to support her, helping her manage any injuries she gets and generally keep her body in the best shape possible.  This allows her to train at her best and therefore be the best fighter she can be.  Watch this space!!!

“Thank you Leanna and the BIA Physio team. I am so grateful for your help and support all the way. Bring on Brazil and Japan!!!! 🙂 ”