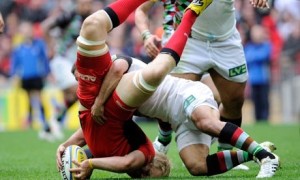 Back in Action is sponsoring Greerton Marist and Rangataua rugby club this season, which has led to some interesting coffee time discussions around concussion in sport. Concussion is recently a hot topic in high level sport across the world, especially in rugby where blows to the head are fairly common (a lot more than in swimming for example!). It is my first season working as a physio in sport so it is a very steep learning curve, particularly when it comes to concussion as this isn’t commonly seen in everyday practice.

Here is a quick link which summaries concussion for you… (watch the video!)

It is challenging dealing with concussions when working as a sports physio as it is such a serious condition that is fairly misunderstood amongst the general population. The seriousness is under appreciated and it is our responsibility to take care of players on the field. Ultimately any injuries are our responsibility (as we are often the only medical professional on scene) and everything should be done to ensure the safety of players. Not spotting a blow to the head in a game or recognising the signs and symptoms of concussion, or not taking a player off when a head injury is suspected, could become fatal, and ultimately this is down to us! You may have heard some stories in the media of this happening.

One of the major signs of concussion is a change in personality and behaviour (most commonly anger in the initial stages). This is difficult for us as early on in the season we did not know the boys at all so understanding a change in behaviour was impossible!  Also, as anyone that knows a rugby player will know, pulling someone off for an injury is never happily accepted by a player. Any concussion- related anger makes this a harder challenge than usual.

There has been a lot of debate about advice re- return to sport. Some say a 21 day stand down period is needed, some say no particular time scale as long as the ‘return to play’ protocol is used, some say that it’s up to GPs to provide a medical certificate. Help! I don’t know what to do.  There is a lot of pressure on us physios to get players to return to sport from players but also coaches, family, team mates, supporters and many other people. Ultimately I have had to choose a rule and stick to it for the whole season.

When I looked into the research I found the latest SCAT3 document which is a great tool for those on the sideline helping teams out to assess the players. It is my go-to now and a fantastic resource for immediate assessment, return to sport and monitoring players as they integrate back into normal life routines.

Coming from the UK, I’m paranoid about rules, regulations, health and safety and just want to know – what should I be doing!! (Give me a couple of months and hopefully I’ll be as cool as a kiwi!)

Luckily at Back In Action Physio we have weekly in-services and we were privileged to have Gemma Tukaki,  a physio who specialises in concussion, who kindly came in to talk to us as part of our in-service training a couple of Fridays ago. Gemma is a physiotherapist who specialises in post-concussion syndrome and head injuries. She does not see concussions acutely as they happen but follows them up a few weeks down the line if they are still struggling. This talk was really informative and it turns out there is LOADS to know about concussion.

I didn’t realise that neck problems are very common in those with concussion (makes sense though, having a knee or a ball hit you in the head will have a knock on/ whiplash type effect on your neck). Some of the residual headache of a concussion can be coming from the muscles or joints in your neck so it is definitely worth getting a physio assessment after a concussion.

I didn’t realise how heavily neuro-psychology was involved in the later stages of concussion. People can have issues with mood changes, problems with sleep, and can become quite stressed about not being at work several months down the line in post-concussion syndrome. Some of these ‘hidden’ effects of concussion can have a really big impact on people’s lives, for example affect relationships at home, being able to concentrate at work, forgetting things, etc.

I thought that it was important for patients with a concussion to get as much rest as possible in order to ‘heal’ the head injury. However, I learnt that there is reduced cerebral blood flow when someone has a concussion and actually, blood is needed for function and healing of the brain.  There is some evidence that these patients should be doing a bit of exercise (what we call subthreshold exercises) to promote recovery. I reckon that this would be very difficult to explain to some of the rugby boys I’m working with and they wouldn’t be able to help themselves from going to full-contact rugby training which would be dangerous as it risks a SECOND blow to the head!.

I’m sure many of you have heard not to let a person with concussion sleep. This is WRONG! If a person with a concussion is having a haemorrhage (dangerous bleed in the brain) they will naturally wake up in excruciating pain. However if they have been taking pain relief, which is usually combined with anti-inflammatories, this can block the ability of the brain to recognise pain and wake themselves up. This is why people with a concussion should not take painkillers or anti-inflammatories as this will mask the pain and they might not wake up if they haemorrhage in the night. So let them sleep, but stay away from the medications within the first few days.

Make sure that you watch the video above so you know what concussion is, the symptoms to look out for and the safe management of concussion. As we have seen in the clinic concussion can occur anywhere, not just on the rugby field, and is particularly dangerous in children.

If you are worried about a concussion, return to sport/work/home life just give us a call at Back In Action Physio. And if you are on the field and your physiotherapist or sports medic advises you come off due to a head knock then try not to get angry with them, they are just trying to look after you!

Rosie Bell – Back in Action Physiotherapist

Severs Disease is the most common cause of heel pain in growing kids. We see this every week in our clinic!**This is due to inflammation of the growth plate at the back of the heel. The more active kids and the ones that are going through a growth spurts are more likely to suffer with this. **This can happen in both or one heel and tends to come and go. When we see this mainly on one side we make sure we look at how they move.At BIA we look to see if these kids have any asymmetry in their loading patterns (walk, run, hope) which may contribute to some of the pain. #painfulheel #seversdisease #activekids #growingkids ... See MoreSee Less