As a sports physiotherapist I love being on the side line at sports games. I love all sports, individual or team, inside or outside, men’s or women’s, contact or non-contact. But I guess the ultimate sport for multiple injuries during one game has to be a game of rugby. And this weekend was the epitome of side line life as a sports physiotherapist as I carried out my duties on the side line of a premier rugby match.

I should have realised it was going to be one of those full-on days because when I arrived the coach of the premier team asked me to find time to assess one of the players who had a sore back and was suspect for taking the field in the starting line-up. It’s always really hard to make the call before the game starts because a lot of players wait all week for their rugby games on Saturdays. Many use it as their release from work or home life that week and they will do anything to be standing on the field. So as I started to assess Q it was obvious his back was in a bad way and even though I could make his back a bit more mobile with some physiotherapy treatment he wouldn’t be able to sprint or change direction like he needed to. Our last resort was to try acupuncture to release off the tension and hope the nerve will settle down.

So as I started to insert the largest acupuncture needle we have into Q’s butt cheek I got a quite comment from the manager saying one of the development players had hurt his shoulder.

It turns out V had dislocated his shoulder. With the help of the manager he had started walking towards to the changing rooms where he sat for a moment while I worked out where best to try to relocate it for him. This was the first time V’s shoulder had dislocated and because it had been out for a few minutes already I knew it wouldn’t go back in easily. After a few attempts, some gritting teeth by V and a huge amount of bravery it was clear the shoulder was not going to just slide back in. We found a room for him to wait with ice until his ride arrived to take him to hospital where they could x-ray, give some strong pain relief and relocate it for him. It will be a long road for V to get back onto the field because his shoulder was out for a long time and the ligaments will take a lot longer to recover from the stretch they have been on. I hope he is a compliant and dedicated patient as the road will be shorter for him.

So back into the changing rooms to remove the needle and let the coach know that Q won’t be playing today. Luckily for another player because he could use his boots. The next 30minutes were spent massaging legs, neck and shoulders; clicking backs, taping shoulders, knees, ankles and ears; reassuring players their injuries will be totally fine so they have the confidence to play hard and keeping the coach up to date with where everyone is at physically.

Start of the game and I prepare my pockets for the usual on-field medical needs while I leave the major tools in the bag on the side-line for major injuries that need to come off for assessment and treatment. Within 5 minutes one of the boys (S) has blurred vision and is playing with his jaw. This is a tough one because you didn’t see him get hit in the head (as often in rugby you don’t) but the signs and symptoms are suspect for a head injury. S won’t stop to let me assess him which is fair enough because he just wants to play but it also makes me think he is hiding something. I advise a few key management staff to keep an eye on him for me while I watch all the other 14 players. It becomes apparent with his kicking game that his vision isn’t great but he is managing to communicate and tackle pretty well so I just wait for my chance to assess him. This comes about 15minutes later when S takes a knee and his jaw is too sore. He passes the concussion testing but I take him off for his vision and jaw and make a mental note to refer him to the sports doctor during the week to definitely rule out any head injury or vision problems.

Next a player casually tells me the plate in his hand (that has been there for 2 years) is starting to make it’s way out of the back of his hand. It’s the first I knew of it and he is in need of strapping to minimise further rubbing on the skin or pain with pressure from someone landing on it or standing on it. A quick taping and second mental note to get him scanned and reviewed by his surgeon during the week.

Half time and we are managing well. The props have sore necks due to tough scrums and the opposition getting tired so they are using their necks to hold them up. I’ve watched quite a few scrums collapsing during the first half and are just hoping the boys have thick enough necks and strong enough stabilisers to handle the repetitive over-load and extreme forces going through them on the worst angles when all the other 16 boys fall on top of them. 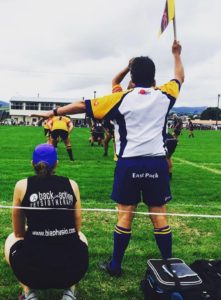 Second half was carnage. First an elite player who is working his way back up through the system after a broken ankle casually shows me his horrendously wobbly shin. He thinks he has broken his leg again and you can guarantee when a player feels the same pain as a break the second time, he remembers it vividly. I pull him off and the coach replaces him with a number 8 because we have now taken off 3 of the backs and there are not many left.

Within 10 minutes that number 8 runs his fingers through his hair and as he flicks his hand it is covered in blood. He thinks it is sweat. I know it’s a gash on the top of his head. I pull him off for blood as the red liquid drips down every side of his head and face like chocolate over a cake and with the help of a spectating doctor we agree that it needs stitching. Damn head wounds don’t stop bleeding until they are sewn back together so I patch him up and send him off to the hospital for stitches. He finally agrees that his head is stinging. Now there’s a hooker on the wing.

As I turn around to watch the game again I am asked to assess a player who is in the sin bin. During the last tackle the opposition decided to give him an extra choke around the neck. He said he thinks he blacked out briefly and now he is seeing black spots sometimes when he blinks. This is the part of rugby that I don’t understand. Why do people play rugby when they clearly should be boxing, wrestling or cage fighting? It annoys me when the players don’t play fair but our boys don’t seem to mind so I suspect a few of them are doing the same out there. Due to a short period of slowed blood flow to the brain the vision of this player is now under threat. If he runs around out there and gets the blood pumping there is a chance he could faint so I make the call to keep him on the side-line for the remainder of the game. The coach needs another back.

Quick check of S to make sure his blurred vision isn’t getting worse and he hasn’t fallen off the bench. Quick check of the suspected broken leg to make sure he hasn’t fainted with the pain. Question to the manager asking if V and the number 8 have made it to a car to go to hospital, which they have. Quick glance at the coach to see if we have any more subs! Back to the game to see a player down stretching and holding his Achilles. When I get out there he says he feels like it is about to snap but it is apparent his whole calf and hamstring are in acute spasm. It is intense cramp which can easily tear muscles so I signal to the side-line to help me carry him off. Thank goodness it wasn’t a snapped Achilles like I originally thought.

This feels like the longest game. I finally get a chance to look at the score and it turns out we are holding our own. We are not going to win today but it has been a battle and we have fought with our body, heads and limbs on the line.

It is the end of the game but my work continues. Now is the time to reassess each player, refer them to the correct medical facility, book them in for treatment on Monday but most importantly give them (and usually their supporting friends and family) instructions on how to manage their injuries over the next 48 hours.

There will be two players to book in to the concussion/acute clinic with the sports medicine doctor this week, one referral for x-ray to see where that plate is positioned, immediate physiotherapy treatments on Monday for Q’s back and V’s dislocated shoulder (which I am hoping has been relocated at the hospital by now), follow-up physiotherapy and nutritional advice for the player with cramp to prevent him actually tearing his calf or snapping his Achilles next week, follow-up liaising with the sports doctor regarding the player with the torn cartilage in his ankle who managed to play half the game today but now his ankle is swelling as we stand here, and finally the prop decides his neck is definitely sore and needs a treatment on Monday so he can do it all again next Saturday.

Busy day at the office and lots of work to be done over the next 6-8 weeks. Thank goodness every week isn’t like this. Bring on next week for a cleaner game and hopefully a win for the boys.

Severs Disease is the most common cause of heel pain in growing kids. We see this every week in our clinic!**This is due to inflammation of the growth plate at the back of the heel. The more active kids and the ones that are going through a growth spurts are more likely to suffer with this. **This can happen in both or one heel and tends to come and go. When we see this mainly on one side we make sure we look at how they move.At BIA we look to see if these kids have any asymmetry in their loading patterns (walk, run, hope) which may contribute to some of the pain. #painfulheel #seversdisease #activekids #growingkids ... See MoreSee Less