Shinae is one of our up and coming local athletes based in Mount Maunganui. She has been playing water polo since she was 10 years old. She spent two years in the Under 12 water polo programme with Tauranga Water Polo Club and managed to make the B team in her final year. Her first year of Under 14 she made the Tauranga A team and travelled to Wellington for Nationals where they came away with a silver medal.  After that experience Shinae was determined to get a New Zealand trial and worked hard the following year on strength and speed at SPEE Training.

She decided to move to Mount College in year 9 and made both the Senior A and Junior A teams, earning herself MVP in the Junior Secondary Schools Challenger Cup Tournament in June.

This is the time that I met Shinae. She came in with a rotator cuff injury to her dominant, right shoulder due to being yanked by an opposition player during a game. Treatment initially focused on her presenting injury and it was quickly apparent that Shinae’s rehab needed to be catered to her sport due to her hypermobile shoulders and stiff upper thoracic spine. As her pain calmed down and function improved we worked together with Reece at SPEE Training to integrate her back into her strength training before reintroducing her to the pool and games.

Shinae was very diligent with the home programs we prescribed but her shoulder pain and tightness kept returning and she was not getting any better or faster. Due to the physio-patient relationship that we had built it I was able to recognize that Shinae was over-training so we had a few meetings involving her parents, Shinae, her trainer and liaising with her coaches to lay out how best to move forward with her recovery and prevent further injuries. 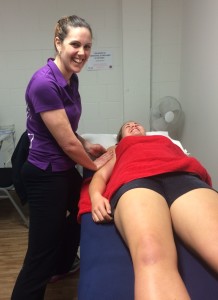 This worked really well and later in the year the Junior A team came away with the gold medal in the North Island Junior Secondary School Champs. It was the first time in 15 years that a junior school girls team had won the championship outside of Auckland.

At a club level Shinae played once again for the Under 14 A team, in which she was captain of the team, and at the end of 2014 she received an Under 15 New Zealand trial. Following three domestic training/selection camps and a lot of hard work with rehabilitation, gym-based and pool-based training she has recently been chosen to represent New Zealand in the born 2000 Under15 squad. She travels to Sydney next week and will play in a Trans Tasman State Series.

Shinae’s future goals are to continue playing for New Zealand Water Polo throughout the age groups, focusing on the 2018 Youth World Championships. Ultimately she would like to receive a University Scholarship to play Water Polo in America. I look forward to helping Shinae achieve these goals through regular massage, monitoring of over training, liaising with her trainer, coach and parents to prevent any further predictable injuries and minimize the effect of any injuries that may come up.

We wish her all the best for Australia and look forward to being a part of her progress within New Zealand Waterpolo and internationally.